Are You Prepared To Protect Yourself?

Are You Prepared To Protect Yourself? Here Are The Signs And Symptoms Of Ovarian Cancer!

Ovarian cancer is a type of cancer that begins in the ovaries. People typically have two ovaries, one on each side of the uterus. The ovaries, each about the size of an almond, produce eggs (ova) as well as the hormones estrogen, progesterone, and testosterone.

Ovarian cancer often goes undetected until it has spread within the pelvis and abdomen. At this late stage, ovarian cancer is difficult to treat and is often fatal.

As abnormal cells accumulate, they form a mass (tumor). Cancer cells invade nearby tissues and can break off from an initial tumor to spread elsewhere in the body (metastasize).

Symptoms of ovarian cancer are not specific to the disease, and they often mimic those of many other more-common conditions, including digestive problems.

Signs and symptoms of ovarian cancer may include:

Aquafit a Splash of Teal

On Saturday, September 27th we will be having Aqua Aerobics in support of Ovarian Cancer Awareness.

Aquafit is a water aerobics exercise class that provides a low impact, high energy challenge for participants of all ages, skill and fitness levels. Jump in and make a splash with this dynamic cardiovascular workout. The 45 minute class will include cardio, interval, range of motion and dance exercise in a top class pool at the National Sports Centre.

The instructor Annette has promised to keep you engaged and excited.

Come join us and wear something teal!

Get your teal toes in support of ovarian cancer.  A few nail spas are supporting the cause by making a donation to OCA Group for everyone that gets their nails painted teal during the month of September.

Join the fight and get your nails painted teal today!

At the following locations:

Keep checking as we add more to the list.

Thanks for your support.

Well we will start the weekend with Turn the Town Teal on Friday, Sept. 12 and hopefully continue it thoughout the weekend.

On Saturday, Sept. 13th,  Families and friends are encouraged to get involved by getting together and having Teal theme events;  Family Games Night, Girls Spa Night, Movie Night, Bowling Night etc.

Any donations can be sent to Bermuda Cancer and Health Centfe attention OCA Bermuda.

Please join us as we hope to save peoples lives 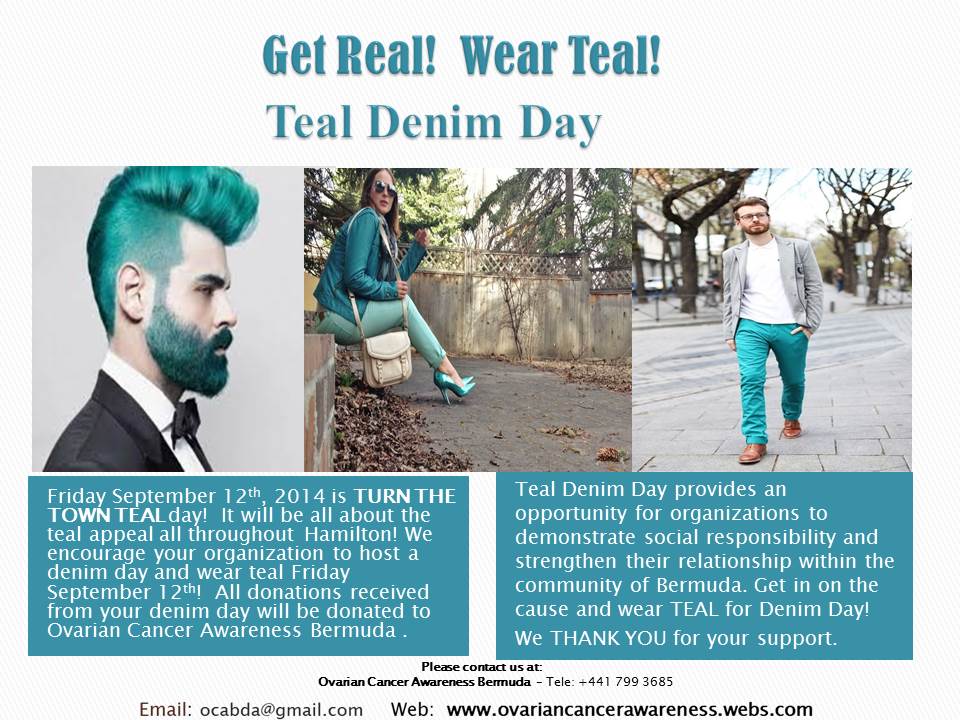 Starting with the Turn the Town Teal Day which is for everyone to join in .  We have asked business to allow their staff to wear denim and teal on Friday, September 12th and donate to the OCA campaign.

PLEASE SEE OUR WEB CALENDAR FOR UPCOMING EVENTS DURING SEPTEMBER 2014